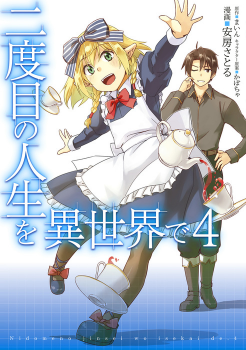 Nidome no Jinsei wo Isekai de:

All of a sudden, out of nowhere.
Renya Kunugi, you have passed away!
So said the young girl who styled herself God.
Apparently, Renya Kunugi the Protagonist had lived long and prospered. His life already came to a peaceful and fulfilling end, but at the request of Her Holiness, he was transported to an alternate world to start a new life as a young man.
Thus did Renya, who was definitely your average everyday guy, end up fighting off bandits and vanquishing monsters. Eventually, after his successively blossoming talents coalesce into a force of sheer awesomeness, he will go on to leave his mark upon this alternate world.

: It seems like we’re going to have one more

: It Seems to Be A House-keeper.

: It Seems To Be A Future Discussion

Tales of Demons and Gods

A Returner's Magic Should Be Special

Hero? I Quit A Long Time Ago Others